What is it like to be a young person in Baltimore struggling to find employment? As a young man named Marcus Allen put it: “Stressful, depressing, and dangerous.”

Allen was speaking on a panel of Baltimore youth as part of “Empowering Opportunity Youth Through Work Experiences,” a half-day meeting held on September 16, 2019, at the Johns Hopkins Bloomberg School of Public Health. 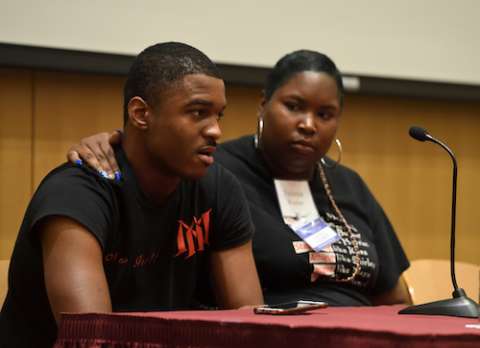 The event—co-sponsored by the Johns Hopkins Center for Adolescent Health and the Bloomberg American Health Initiative, in collaboration with the Office of the U.S. Surgeon General, the National League of Cities, and the National Youth Employment Coalition—focused on the issue of “opportunity youth,” or young people between the ages of 16 and 24 who are disconnected from work and school.

Research presented at the event by Measure of America, an initiative of the Social Science Research Council, told the story of this challenge in Baltimore.

In Baltimore, there are 11,000 opportunity youth—15.9 percent of young people in the city—who are neither working nor in school. In Baltimore, too, black youth are disproportionately represented among opportunity youth; they are more than 3.5 times more likely to be disconnected as white youth. The rate of disconnection among black young men is more than 1.5 times the city average. In fact, 86 percent of disconnected youth are black.3

Disconnection can set young people on a path marked by struggle, from lower earnings and rates of homeownership to higher rates of unemployment, crime, and incarceration. It can also put youth at higher risk of poor health and even early death. One youth shared the story of being accepted to Baltimore’s YouthWorks summer jobs program, while a close friend was not. On the same day that he graduated from YouthWorks, his friend was shot and killed.

Disconnected young people can struggle with feelings of frustration and hopelessness. Youth speakers talked about not having money to buy work attire or to pay bus fare to get to an interview; they asked for compassion and understanding about stressors at home and school that made it difficult for them to meet the demands of a job.

Jobs could be key to turning things around—if they didn’t feel so out of reach. “Employment opportunities for young people are a huge key in fostering dignity and self-pride … and making [young people] productive members of society,” said Antonio Moore, a Baltimore activist and one of the youth speakers at the event.

At the event, Surgeon General Adams said to the youth in the room, “Employers need your talent and the skills, innovation, and ideas you can bring to the economy or marketplace. We can’t afford to leave anyone out.”

The benefits of reconnecting opportunity youth are broadly shared as well, personally, societally, and financially. Measure of America data shows that if all of Baltimore’s disconnected youth were reconnected, an additional $134.6 million in federal tax revenue and $17.8 million Maryland state tax revenue would be created.5

Participants discussed setting an ambitious goal to improve youth connection in Baltimore. How could such a goal be reached? Tamar Mendelson, director of the Center for Adolescent Health, and Kristin Mmari, associate professor at the Bloomberg School, shared several public health strategies, including developing an infrastructure to prevent youth disconnection and promote re-engagement, supporting data collection on opportunity youth subgroups and risk/protective factors for disconnection, and, importantly, involving the youth themselves.

As one youth speaker said at the conclusion of the event: “A message for all policymakers out there: Youth need a seat at the table. You cannot make decisions about youth without youth.”