Johns Hopkins Bloomberg School of Public Health has appointed Margaret Daniele (Dani) Fallin, PhD, as a Bloomberg Centennial Professor. This is an endowed position supported by the Bloomberg American Health Initiative through a gift from Bloomberg Philanthropies.

Fallin serves as the Sylvia and Harold Halpert Professor and chair of the Bloomberg School’s Department of Mental Health, as well as director of the Wendy Klag Center for Autism and Developmental Disabilities. She holds joint positions in the School’s departments of Biostatistics and Epidemiology and in the Johns Hopkins School of Medicine. Her research focuses on neuropsychiatric disorders, primarily autism, and developing applications and methods for genetic and epigenetic epidemiology—namely, the integration of genomics with epidemiology to study health and disease in populations—particularly as applied to mental health and child development. 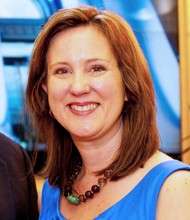 “The mental health challenges facing our nation and the world have become manifestly clear during the pandemic. There is no better time to recognize leaders in the field like Dr. Fallin,” says Bloomberg School Dean Ellen J. MacKenzie, PhD, ScM. “This support will allow her to expand her contributions to the fields of neuropsychiatric disorders and population mental health and to continue her tremendous leadership at our School.”

Fallin is known globally for her research on the genetic and environmental epidemiology of neuropsychiatric disorders, including autism spectrum disorder, Alzheimer's disease, and other psychiatric conditions, as well as the integration of genetic susceptibility and perinatal environmental risk.

Much of Fallin’s professional career has been spent evaluating and improving methods for genetic analysis of population data. She works with the Johns Hopkins Center for Epigenetics to expand the field of epigenetic epidemiology and study the epigenetic contributions to human disease.

“The pandemic has brought so many underlying health issues to the forefront, none more important than mental health. Now more than ever we need to invest in the cutting-edge research that will change lives, while also supporting the people leading it—people like Dr. Fallin,” said Michael R. Bloomberg, founder of Bloomberg LP and Bloomberg Philanthropies. “Dr. Fallin has already contributed a great deal to the Bloomberg American Health Initiative, and I have no doubt that her work will continue to lead the field for years to come.”

Through her leadership of the Bloomberg School’s Department of Mental Health, Fallin has championed the work of faculty, staff, and students across public mental health including substance use, aging-related mental health, prevention interventions in childhood and adolescence, violence prevention, psychiatric genomics, implementation science, and global mental health—many areas that contribute to the mission of the Bloomberg American Health Initiative.

Fallin received a BS from University of Florida, Gainesville, in 1993, and a PhD in Genetic Epidemiology from Case Western Reserve University in 2000. She joined the faculty at the Bloomberg School shortly thereafter.

This professorship endowment is part of the Bloomberg American Health Initiative, which is supporting 25 new endowed positions. The Initiative focuses on addressing major health challenges facing the nation, including obesity and the food system, environmental challenges, addiction and overdose, violence, and adolescent health.

Teaching Youth to Become Advocates of the COVID Vaccine